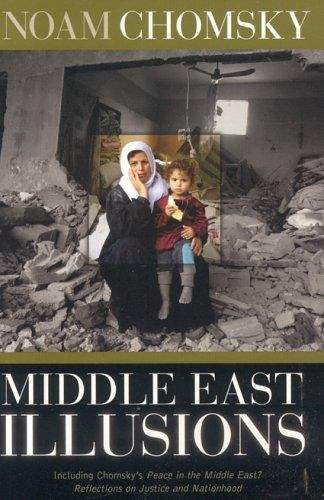 What are the roots of the Israel-Palestinian conflict and how has it been influenced by the United States? Why has the U.S.-brokered "peace process" repeatedly failed to deliver peace? What are the prospects for a just resolution? What interests underlie current U.S. strategic doctrines in the Middle East, especially in its redeclared "war on terrorism" after 9-11, and how do we look beyond them to find more peaceful and viable alternatives?

These are among the current and long-standing questions Noam Chomsky takes up in his newest book. Middle East Illusions presents recent chapters written by the author about the myths behind the peace process, the second Palestinian Intifada (which began in September 2000 and continues today in defiance of Israeli repression), and the Bush administration's response to the September 11 attacks on the United States, including its drive toward another war with Iraq.

Middle East Illusions also includes the full text of Chomsky's earlier book, Peace in the Middle East? Reflections on Justice and Nationhood, written during the crucial period spanning the Six-Day and 1973 wars, events that continue to define and deeply influence the world today. It therefore presents in-depth analysis covering several decades, making it one of the richest of any analysis published about the region's geopolitics.

Noam Chomsky is recognized internationally for his critical analysis of the Middle East. His thoroughly documented research draws on an immense range of sources, including Hebrew texts rarely discussed in the United States, declassified government planning documents, and other sources all too often overlooked in discussions of the U.S. role in the Palestinian-Israeli conflict.