A Time of Our Choosing 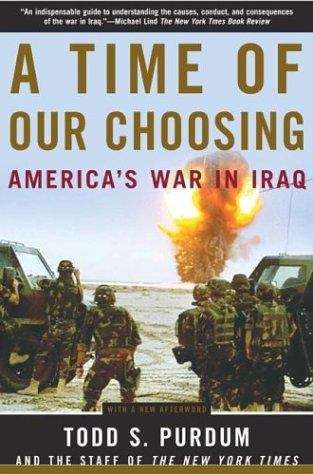 It was a war like no other the United States had ever fought. It began with the bombing of Saddam Hussein’s bunker and ended with statues of the Iraqi dictator being toppled in downtown Baghdad, and it marked a turning point in America’s relations with its enemies, its allies, and its sense of itself. Yet most Americans experienced the war as impressionistic and often confusing—the story of one battle here, one unit there, a report from one city, then another, without the larger context we so urgently needed. Each reporter had his “slice” of the war, it seemed, but no one had the whole story or the broad view.

A Time of Our Choosing fills that gap brilliantly, drawing on the unparalleled resources and reportage of The New York Times. Todd S. Purdum, one of the paper’s most gifted storytellers, traces the war in Iraq from the first rumblings after 9/11, to the diplomatic recriminations at the United Nations, to the battles themselves and their aftermath. He deftly rolls out the whole canvas before our eyes, showing how the individual “slices” fit together into a single, gripping drama.

Purdum also explores the complex legacy of America’s near-unilateral action. Since the 9/11 attacks, President George W. Bush has vowed that the United States would confront its enemies “at a time of our choosing,” and Purdum shows in vivid terms what this choice has meant for our now transformed world.