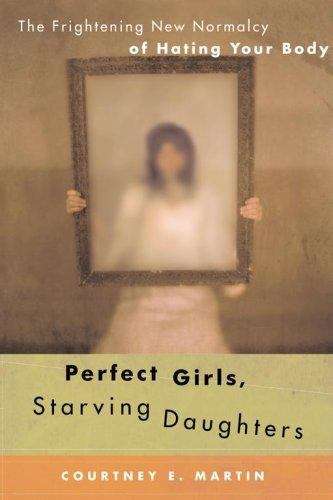 "Why does every one of my friends have an eating disorder, or, at the very least, a screwed-up approach to food and fitness?" writes journalist Courtney E. Martin. The new world culture of eating disorders and food and body issues affects virtually all -- not just a rare few -- of today's young women. They are your sisters, friends, and colleagues -- a generation told that they could "be anything," who instead heard that they had to "be everything." Driven by a relentless quest for perfection, they are on the verge of a breakdown, exhausted from overexercising, binging, purging, and depriving themselves to attain an unhealthy ideal. An emerging new talent, Courtney E. Martin is the voice of a young generation so obsessed with being thin that their consciousness is always focused inward, to the detriment of their careers and relationships. Health and wellness, joy and love have come to seem ancillary compared to the desire for a perfect body. Even though eating disorders first became generally known about twenty-five years ago, they have burgeoned, worsened, become more difficult to treat and more fatal (50 percent of anorexics who do not respond to treatment die within ten years). Consider these statistics: Ten million Americans suffer from eating disorders. Seventy million people worldwide suffer from eating disorders. More than half of American women between the ages of eighteen and twenty-five would prefer to be run over by a truck or die young than be fat. More than two-thirds would rather be mean or stupid. Eating disorders have the highest mortality rate of any psychological disease. In Perfect Girls, Starving Daughters, Martin offers original research from the front lines of the eating disorders battlefield. Drawn from more than a hundred interviews with sufferers, psychologists, nutritionists, sociocultural experts, and others, her exposé reveals a new generation of "perfect girls" who are obsessive-compulsive, overachieving, and self-sacrificing in multiple -- and often dangerous -- new ways. Young women are "told over and over again," Martin notes, "that we can be anything. But in those affirmations, assurances, and assertions was a concealed pressure, an unintended message: You are special. You are worth something. But you need to be perfect to live up to that specialness." With its vivid and often heartbreaking personal stories, Perfect Girls, Starving Daughters has the power both to shock and to educate. It is a true call to action and cannot be missed.