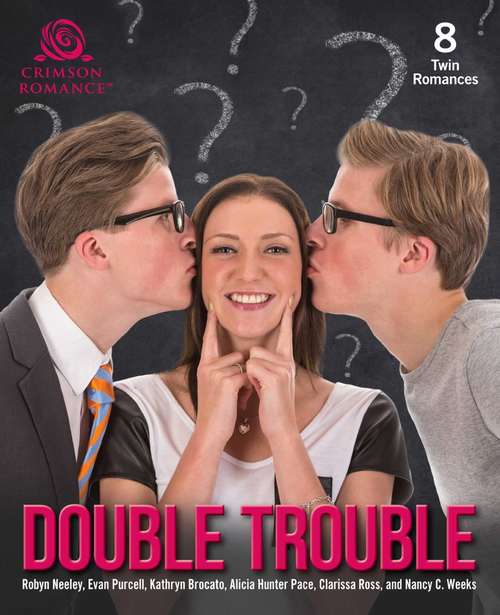 You're seeing double and enjoying trouble as these six sets of twins try to win your heart. It's twice the fun of ordinary romances!Holiday Wedding: After being dumped by his fiancee a year ago, Drew Cannon retreated to Tokyo to throw himself into the family toy-making business. Now he's returned home for the holidays and is forced to team up with his ex to plan last-minute nuptials for his twin brother. Will working together mend and reunite their broken hearts?Waking Up to Love: When Scott McInney's mom gets a slight case of amnesia, he convinces Ramona, the identical twin sister of his runaway wife, to step into her heels. Ramona reluctantly agrees to help out, but when the pretending gets too real, will Scott figure out that he might have married the wrong twin?The Look-Alike Bride: Leonie Daniel leads a double life, often standing in for her glamorous older sister who works as a government agent. All Leonie has to do this time is spend a few weeks in Zara's lakeside cabin, behave like Zara, and avoid Adam Silverthorne, the man her sister is interested in. But now Adam is falling for Leonie...or is he?Redeeming Rafe: Bull riding, cliff diving, plane jumping--Rafe Beauford is the twin brother who embraces the adrenaline rush. But his wild lifestyle comes to a halt when he discovers he's the father of toddlers. Taking his twin girls back to Beauford, he plans to leave them there with a nanny, but the woman he hires, widowed mom Abigail Whitman, is determined to show him the importance of family--and love.Reforming Gabe: After NFL wide receiver Gabe Beauford's team loses the Super Bowl, he heads back to Beauford to hide and brood, but crossing paths with independent jewelry maker Neyland MacKenzie puts a new gleam in his eye. She needs saving, and this twin needs a project. But will his not-so-deft touch ruin her dreams and their chance at real love?Eternal Desire: Heiress Della Standish had been summoned to Rome to be reunited with her long-lost twin sister, Irma, and to share the great family fortune with her. But from the moment Della enters the opulent halls of the Sanzio Palace, she is encircled by mystery and dark suspicion, her life endangered by the satanic power of an Italian noble and her new-found love threatened in a gilt-edged world that hides evil in its secret heart.In the Shadow of Evil: After ten years with Maryland's Special Crime Unit, very little rattles Jared McNeil. He and his twin, Noah, have always handled their law enforcement jobs with skill. Then Jared's nemesis resurfaces, with his sights set on the woman Jared is honor bound to protect. Will doing his duty cost Jared his love and his family?In the Shadow of Vengeance: Elizabeth Merlot can't afford to let handsome Detective Noah McNeil discover her secret past. But when trouble finds her son, Noah may be the only one who can save their lives.Sensuality Level: Sensual