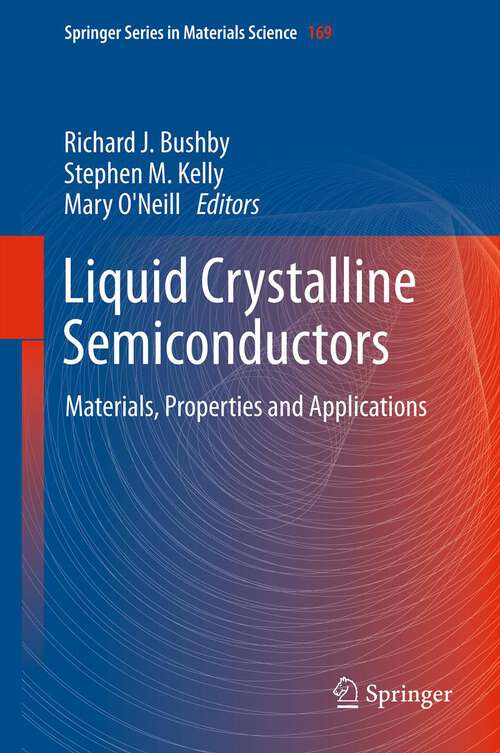 This is an exciting stage in the development of organic electronics. It is no longer an area of purely academic interest as increasingly real applications are being developed, some of which are beginning to come on-stream. Areas that have already been commercially developed or which are under intensive development include organic light emitting diodes (for flat panel displays and solid state lighting), organic photovoltaic cells, organic thin film transistors (for smart tags and flat panel displays) and sensors.

Within the family of organic electronic materials, liquid crystals are relative newcomers. The first electronically conducting liquid crystals were reported in 1988 but already a substantial literature has developed. The advantage of liquid crystalline semiconductors is that they have the easy processability of amorphous and polymeric semiconductors but they usually have higher charge carrier mobilities. Their mobilities do not reach the levels seen in crystalline organics but they circumvent all of the difficult issues of controlling crystal growth and morphology. Liquid crystals self-organise, they can be aligned by fields and surface forces and, because of their fluid nature, defects in liquid crystal structures readily self-heal.

With these matters in mind this is an opportune moment to bring together a volume on the subject of 'Liquid Crystalline Semiconductors'. The field is already too large to cover in a comprehensive manner so the aim has been to bring together contributions from leading researchers which cover the main areas of the chemistry (synthesis and structure/function relationships), physics (charge transport mechanisms and optical properties) and potential applications in photovoltaics, organic light emitting diodes (OLEDs) and organic field-effect transistors (OFETs).

This book will provide a useful introduction to the field for those in both industry and academia and it is hoped that it will help to stimulate future developments.