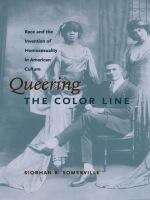 Queering the Color Line transforms previous understandings of how homosexuality was "invented" as a category of identity in the United States beginning in the late nineteenth century. Analyzing a range of sources, including sexology texts, early cinema, and African American literature, Siobhan B. Somerville argues that the emerging understanding of homosexuality depended on the context of the black/white "color line," the dominant system of racial distinction during this period. This book thus critiques and revises tendencies to treat race and sexuality as unrelated categories of analysis, showing instead that race has historically been central to the cultural production of homosexuality. At about the same time that the 1896 Supreme Court Plessy v. Ferguson decision hardened the racialized boundary between black and white, prominent trials were drawing the public's attention to emerging categories of sexual identity. Somerville argues that these concurrent developments were not merely parallel but in fact inextricably interrelated and that the discourses of racial and sexual "deviance" were used to reinforce each other's terms. She provides original readings of such texts as Havelock Ellis's late nineteenth-century work on "sexual inversion," the 1914 film A Florida Enchantment, the novels of Pauline E. Hopkins, James Weldon Johnson's Autobiography of an Ex-Coloured Man, and Jean Toomer's fiction and autobiographical writings, including Cane. Through her analyses of these texts and her archival research, Somerville contributes to the growing body of scholarship that focuses on discovering the intersections of gender, race, and sexuality. Queering the Color Line will have broad appeal across disciplines including African American studies, gay and lesbian studies, literary criticism, cultural studies, cinema studies, and gender studies.