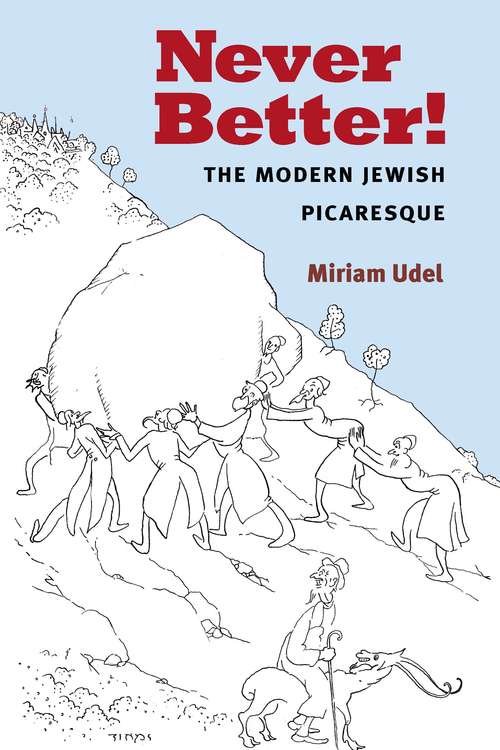 It was only when Jewish writers gave up on the lofty Enlightenment ideals of progress and improvement that the Yiddish novel could decisively enter modernity. Animating their fictions were a set of unheroic heroes who struck a precarious balance between sanguinity and irony that author Miriam Udel captures through the phrase "never better." With this rhetorical homage toward the double-voiced utterances of Sholem Aleichem, Udel gestures at these characters' insouciant proclamation that things had never been better, and their rueful, even despairing admission that things would probably never get better.

The characters defined by this dual consciousness constitute a new kind of protagonist: a distinctively Jewish scapegrace whom Udel denominates the polit or refugee. Cousin to the Golden Age Spanish pícaro, the polit is a socially marginal figure who narrates his own story in discrete episodes, as if stringing beads on a narrative necklace. A deeply unsettled figure, the polit is allergic to sentimentality and even routine domesticity. His sequential misadventures point the way toward the heart of the picaresque, which Jewish authors refashion as a vehicle for modernism--not only in Yiddish, but also in German, Russian, English and Hebrew. Udel draws out the contours of the new Jewish picaresque by contrasting it against the nineteenth-century genre of progress epitomized by the Bildungsroman.

While this book is grounded in modern Jewish literature, its implications stretch toward genre studies in connection with modernist fiction more generally. Udel lays out for a diverse readership concepts in the history and theory of the novel while also explicating the relevant particularities of Jewish literary culture. In addressing the literary stylistics of a "minor" modernism, this study illuminates how the adoption of a picaresque sensibility allowed minority authors to write simultaneously within and against the literary traditions of Europe.