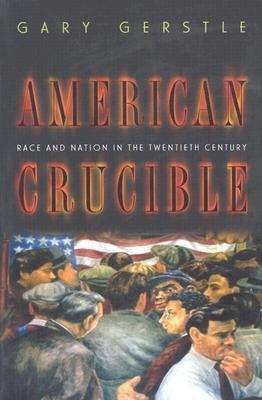 This sweeping history of twentieth-century America follows the changing and often conflicting ideas about the fundamental nature of American society: Is the United States a social melting pot, as our civic creed warrants, or is full citizenship somehow reserved for those who are white and of the "right" ancestry? Gary Gerstle traces the forces of civic and racial nationalism, arguing that both profoundly shaped our society. After Theodore Roosevelt led his Rough Riders to victory during the Spanish American War, he boasted of the diversity of his men's origins- from the Kentucky backwoods to the Irish, Italian, and Jewish neighborhoods of northeastern cities. Roosevelt's vision of a hybrid and superior "American race," strengthened by war, would inspire the social, diplomatic, and economic policies of American liberals for decades. And yet, for all of its appeal to the civic principles of inclusion, this liberal legacy was grounded in "Anglo-Saxon" culture, making it difficult in particular for Jews and Italians and especially for Asians and African Americans to gain acceptance. Gerstle weaves a compelling story of events, institutions, and ideas that played on perceptions of ethnic/racial difference, from the world wars and the labor movement to the New Deal and Hollywood to the Cold War and the civil rights movement. We witness the remnants of racial thinking among such liberals as FDR and LBJ; we see how Italians and Jews from Frank Capra to the creators of Superman perpetuated the New Deal philosophy while suppressing their own ethnicity; we feel the frustrations of African-American servicemen denied the opportunity to fight for their country and the moral outrage of more recent black activists, including Martin Luther King, Jr. , Fannie Lou Hamer, and Malcolm X. Gerstle argues that the civil rights movement and Vietnam broke the liberal nation apart, and his analysis of this upheaval leads him to assess Reagan's and Clinton's attempts to resurrect nationalism. Can the United States ever live up to its civic creed? For anyone who views racism as an aberration from the liberal premises of the republic, this book is must reading.