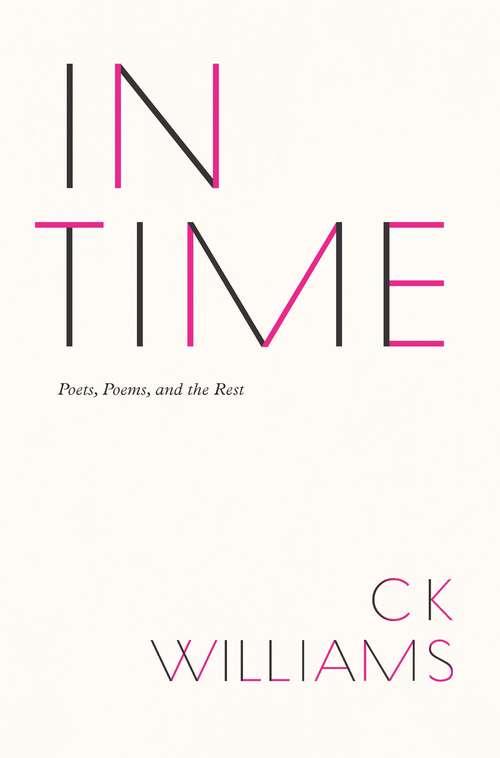 Winner of the National Book Award, the Pulitzer Prize for Poetry, and numerous other awards, C. K. Williams is one of the most distinguished poets of his generation. Known for the variety of his subject matter and the expressive intensity of his verse, he has written on topics as resonant as war, social injustice, love, family, sex, death, depression, and intellectual despair and delight. He is also a gifted essayist, and In Time collects his best recent prose along with an illuminating series of interview excerpts in which he discusses a wide range of subjects, from his own work as a poet and translator to the current state of American poetry as a whole. In Time begins with six essays that meditate on poetic subjects, from reflections on such forebears as Philip Larkin and Robert Lowell to "A Letter to a Workshop," in which he considers the work of composing a poem. In the book's innovative middle section, Williams extracts short essays from interviews into an alphabetized series of reflections on subjects ranging from poetry and politics to personal accounts of his own struggles as an artist. The seven essays of the final section branch into more public concerns, including an essay on Paris as a place of inspiration, "Letter to a German Friend," which addresses the issue of national guilt, and a concluding essay on aging, into which Williams incorporates three moving new poems. Written in his lucid, powerful, and accessible prose, Williams's essays are characterized by reasoned and complex judgments and a willingness to confront hard moral questions in both art and politics. Wide-ranging and deeply thoughtful, In Time is the culmination of a lifetime of reading and writing by a man whose work has made a substantial contribution to contemporary American poetry.

Copyright:
2012 The University Of Chicago Pres